Years ago at a party in Denver somebody asked me what I did. I said I was a translator. “That’s like straight out of a circus,” is what the response was. I wonder what that person would say today.

At the Conference of the American Translators Association in Denver there were many signs that translators as well as interpreters play a more central role in American business and government. In fact, the professions made it onto the shortlist of the 50 best careers of 2011, as compiled by US News and World Report (updated Feb 2018).

Terminology management is a niche, and many of my translator colleagues have asked me over the years what terminology is. The scientific answer is “terminology is the study of terms and concepts within a subject field.” Each domain or subject area uses specialized terms (as opposed to words) that have very specific meaning to the people using them.

In terminology management, we coin, collect, research, document and distribute these terms, most often via terminology management system (TMS). Each term is documented in a terminological record that is not just used once and then discarded. Instead, it is set up so that it can be used over and over again similar to a paper dictionary. But because it is in electronic format, it can be connected to the authoring environment of a technical writer or the translation tool of a translator. And again similar to a paper dictionary, a terminological entry should follow standards. These standards and formats are different from a dictionary entry. In addition, the entry also is not a single, stand-alone record; it is connected to the related terms of the subject field which together form a system.

Terminologists extract terms from documents, either manually or with the help of term extraction tools. They evaluate which terms should go into the terminology database. They do more or less extensive research and document their findings in the database. When the collection, e.g. for a particular project is done, they make sure that users know and have access to the data.

And lest I get heat from my expert readers: terminology management can happen in monolingual environments. It is most often used in settings where source-language texts are translated into multiple target languages. But even then, terminology tasks happened long before the first translators touch a text.

Going back to the circus reference from way back when: translation has become more mainstream in the US since. Terminology management has a long way to go. And I have likened terminologists to jugglers before. 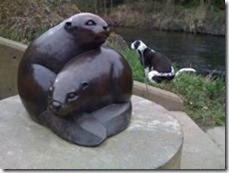