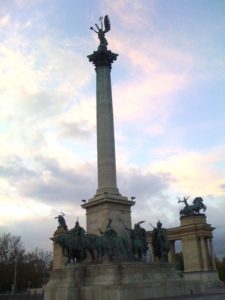 Here is a virtual postcard from memoQfest in Hungary’s capital.

After two days of train-the-trainer courses, master classes on the new Kilgray terminology tool and memoQ, energy is running as high as ever at memoQfest. For those of you who are not familiar with memoQ, check out the Kilgray website and background information. Though no longer a translator, I tested the tool for the first time in fall and liked it right away. The structure and interface of the tool is so simple that I was working away on a translation within two hours.

As a terminologist, I struggled with the term base part of memoQ: It seemed too simplistic and simply not extensive enough. That said, if it is paired with a solid terminology management tool in the background (see qTerm), the current functionality passes muster as a quick way for translators to add terms that hadn’t been added to the terminology beforehand. And which project ever has enough terms documented upfront (How many terms do we need to document)?

Besides the fact that I very much like memoQ and will continue to watch and, where possible, assist with the development of qTerm, I simply enjoy the Kilgray culture. We closed out the night at a wine tasting, but spirits would have been high even without a bit of alcohol.